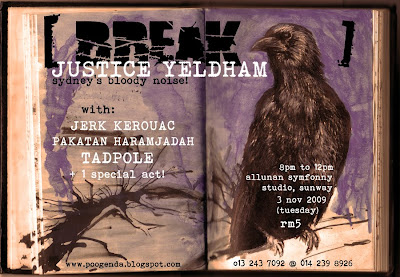 --Formerly a turntablist – "in the loosest sense" -Justice Yeldham, aka Lucas Abela, is known world wide for his miced-up performances of triangular sheets of glass - wired to a super utility belt of effects pedals - which he plays with his mouth, hyperventilating and getting some of the freakiest industrial sounds you’ll hear in modern music, which, despite their nightmarish variety, Yeldham plays with practiced precision. Performances are intensely physical or ‘neo-brutalist’ and not for the faint-hearted.

Steve Towson, folk/punkrocker from Australia will tour South East Asia again this October! He will play shows in Phillpines, Indonesia, Singapore and Malaysia. On 12th october, Monday, night time, we are organizing one punk as folk ACCOUSTIC show for him at FoodNotBombs house Petaling Jaya, No.14 Jalan Jelawat 8/10, Section 8, Petaling Jaya, Malaysia. This is the final show for the tour!

It's an outdoor show, on the front yard of the single storey terrace house with the nice park/playground in front of it. Imagine some kind of house party with proper performances and there's no entrance fee but will ask for people kindness to donate some money. Pls Pls Pls!

The show will start at 6.30 pm until 12 pm. Do come early, on time and support everyone and each other!!

Here is the agenda:

1.Running by Mien - a documentary on Refugees in Malaysia / 30 minutes
*website

*Mien Ly is an independent filmmaker. She will be around for the screening. Take this chance to      discuss/talk to her.

Chocolate cake? vegan bread? Pau? Cookies? Pizza? Ketupat? Thilaga? This is limited! Come early to have a taste on our special vegan recipe. You’ve been warned.

Steve Towson is taking stock of what has been, and what may become, with the release of his latest CD, a retrospective album of re-recorded material spanning his career since 2001.

His one man, one guitar approach allowed him to play “anywhere, anytime”, which he did with prolific intensity. In addition to taking his music to audiences within the relatively safe political climate of Australia, Steve has toured throughout South-East Asia numerous times. Despite the tight or turbulent political atmosphere in some countries, Steve has been unwavering in his advocacy for equitable social change.

A musical broadening occurred in 2006, when collaboration with fourteen musicians in Australia and SE Asia allowed Steve to develop the concept of his new backing band The Conscripts. He invited five musicians into the studio to work on a full-length release. Titled Shah Mat, it was an album of musical and lyrical diversity, which received strong support from Triple J’s Short.Fast.Loud and community radio, and was compared musically to Nick Cave, The Clash, The Pogues, The Ramones and Leonard Cohen.

Since the end of the Conscripts project, Steve has returned to his early “anti-folk” recordings, and responded to punters’ calls for a compilation of favourite tracks from his first three albums. The resulting retrospective CD (self-titled, 2009) is an exposition of simplicity, passion and raw honesty. His sincere lyrics are accompanied only by his characteristic guitar performance. The release is now on offer independently and during Steve’s launch tour in Oct 2009. 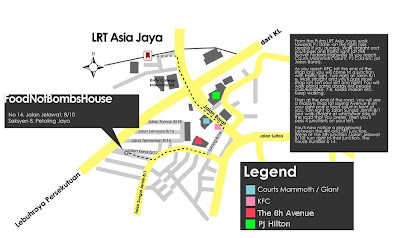 Posted by poodien at 6:06 PM No comments: